1/30 - 7pm - Fulfilling a Childhood Dream in Weather and Television 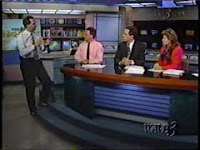 Back in the mid 90's I began having a fascination with weather thanks to my childhood fear of thunderstorms. In particular I can remember going to the basement for the storm that eventually generated the May 28th, 1996 tornado in parts of Jefferson, Bullitt, and Spencer Counties in Kentucky near the Louisville area. The TV was turned up loud so we could hear it from the basement and the voice I remember was John Belski's, who was chief meteorologist at WAVE 3 TV in Louisville. His was a calming voice in the middle of the chaos that was going on outside as this supercell storm moved through town. As I watched him after Jefferson County was cleared from the tornado warning I realized that he had the coolest job in the world. He worked with computers (check!), forecast weather events (check!), got to talk to lots of people everyday (check!), and most importantly saved lives during severe weather with his information (double check!). 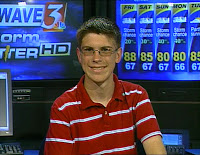 While other childhood dreams came and went, this particular fascination with weather and my desire to get a degree in meteorology never fluctuated. In middle school I had finally made up my mind that becoming a meteorologist would be the ultimate end game for me. Since then I've been working every single day to make sure that I could become the best meteorologist that I could be. WAVE 3 was a huge part of this because John Belski and others would routinely post things on the Internet that I could learn from. I grew to really enjoy watching this station as a student because the meteorologists who worked there were different. They each knew the area very well, used sound science in their forecasting, and most importantly, had a passion for weather I've not seen anywhere else. This hasn't changed. 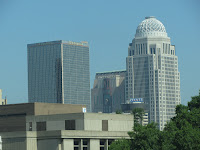 I was fortunate enough to intern with Kevin Harned, Brian Goode, and the rest of the WAVE 3 Storm Tracking Team over the summer and quickly realized that Louisville and WAVE were still home to me. I know a lot of people like to leave home once they go to college and into a career but after seeing so many different places in my years of storm chasing, working in TV, and going to college I found that the best one for me is right at home in Kentuckiana. But never did I think that I would be able to return there so quickly.

That's right. If you haven't guessed it yet (or watched the video at the top of this post), I'm announcing today that my childhood dream of becoming a meteorologist in Louisville at WAVE-TV will become a reality in late May after I graduate from Mississippi State. The position I've accepted has me as a meteorologist on WAVE 3 Sunrise Saturday and a social media and marketing graphic artist for the rest of the week while still assisting the Storm Tracking Team in their online offerings. This brings the number of hometown meteorologists on the WAVE 3 Storm Tracking Team to 6. Yes, 6! That's an astounding amount of resources for a TV station and it's only going to aid in serving up the best weather forecasts and information for Kentuckiana. This is a fantastic opportunity and I'm still trying to comprehend just how amazing it is. I'm looking forward to being back home in my city, my Louisville, and doing what I love most. Thanks to all who've supported me over the years. This is big stuff!
Posted by Ryan Hoke at 5:59 PM

I am very happy for you and for us in Louisville!

Brings tears to our eyes and joy to our hearts. Congratulations!!
Love, Nana and Pop Pop

Ryan Hoke
Ryan is the newest member of the WAVE 3 Storm Tracking Team. Each tornado season, Ryan is a tour guide and technical assistant with Storm Chasing Adventure Tours. He also served as the first-ever student member of the National Weather Association's Broadcast Meteorology Committee. His career path in meteorology comes after years of childhood interest and running a Louisville, Kentucky weather website called Ryan Weather during his high school years.